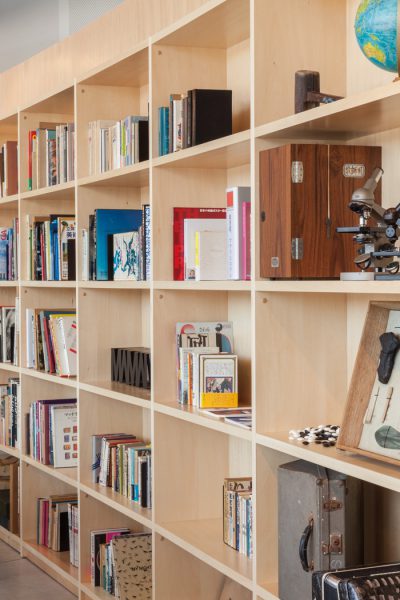 Awazu’s activities crossed the boundaries of architecture, art, film, theater, music, criticism and design. He was ahead of his time in his focus on environmental problems, Antoni Gaudi, hieroglyphs and folk art. The vision and totality of his expressive activities formed as a result of his complete devotion to these subjects and his research of them were unrivaled.

What one might see the genre-transcending “encyclopedic curiosity” of Kiyoshi Awazu, who participated in the 2000 and 2003 Echigo-Tsumari Art Triennale, as forming an important part of the spiritual component that supports the vision behind this event.

The Kiyoshi Awazu Books is an open-shelf library of approximately 1,300 of Awazu’s books, which were kindly donated by his family. From the lineup of books that faith fully demonstrates the breadth and depth of his interests, one can gain an insight into the process through which this self-educated man constructed the magnificent world portrayed by his works.